Men dominate media: in news rooms and stories, they get more exposure on camera, more by-lines and are quoted more often. An analysis of  2,353,652 news articles covering 12 topic categories from over 950 news outlets over a six month period ending in April, 2015 showed that mentions of men ranged from 69.5% in Entertainment to 91.5% in Sports. The only exception was Fashion, where women edged out men slightly at 54%. A more recent analysis by science writer Ed Yong of his STEM stories was similarly discouraging: only 24 percent of his quoted sources were women. Worse, 35 percent of his articles featured no female voices at all. Why does this matter? As journalist and editor Adrienne Lafrance noted in The Atlantic, the extreme gender imbalance in the media implies that the best voices are not those of women and misses out on diverse viewpoints, experiences and ideas. Journalist and field geophysicist Mika McKinnon is acutely aware of this gender differential in reporting and makes it a point to ask both men and women for expert comments. When making press requests, she is typically turned down more often by women. One case stood out: not one of 74 women requested for an interview obliged, contrasting with 11 of 15 men who agreed, including two who stated that they were not experts. She tweeted her frustration.

True story:
I made 74 press requests for women & 15 for men on [topic]. No women give interviews (although several suggested other names). 11 men gave interviews, 2 stating they weren’t experts.

This tweet was seen over 792,000 times with more than 16,000 interactions, clearly demonstrating that the topic touched a nerve. We asked Mika to share her experience and her thoughts on the gender imbalance in journalism reporting. 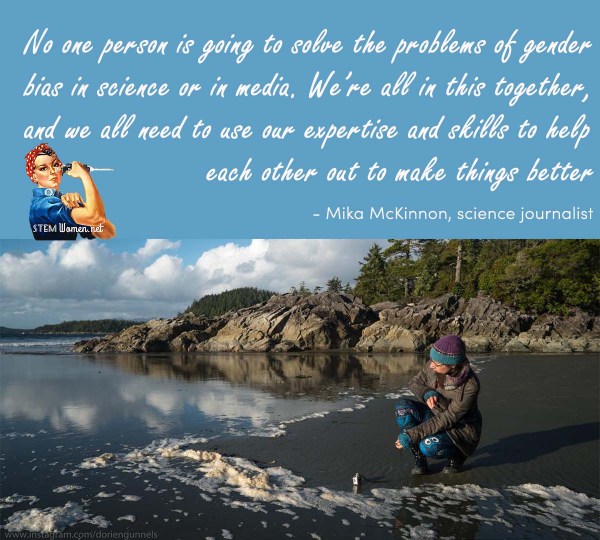